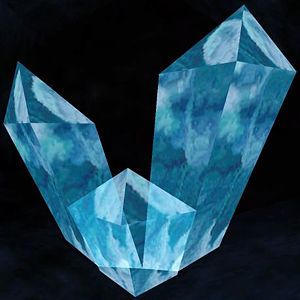 Tarydium is an alien element usually found in transparent blue, crystalline form. It somehow contains great power and is therefore desired as a power source by many corporations and civilizations. In Unreal, The Skaarj occupy Na Pali and enslave the Nali in order to mine the tarydium found there. The human civilization has several tarydium mining corporations, the largest of which being the famed Liandri Mining Corporation. It is mentioned at least in passing in all Unreal games, but doesn't play any role in Unreal 2.

Tarydium has been around in the Unreal franchise since the beginning, when it played an important role in Unreal. The tarydium on Na Pali attracts the prison ship Vortex Rikers which gets caught in the gravitational field of the planet and crashes. On the planet Prisoner 849 discovers the Skaarj mining the planet for tarydium.

The object of Unreal Tournament's AS-Mazon is to destroy a large tarydium shard which is powering enemy war machines.

In Unreal Tournament 2004 matches are fought in the Na Pali mines in DM-Rrajigar. ONS-Dawn is also fought on a planet with tarydium crystals.

Besides by harnessing the power generated by tarydium, the element has been used in the weapons industry in other ways.

The Stinger (Unreal, Unreal Championship 2, and Unreal Tournament 3) was originally developed as a mining tool by Liandri, but was discovered to be an effective weapon as well. It can fire off tarydium shards as rapid fire projectiles, or act as a toned-down Flak Cannon by firing in a spread pattern. The UC2 variant of the Stinger can also shoot semi-sentient shards that have a limited homing capability. The Stinger inspired the creation of the Stinger Minigun (UT3) which also uses tarydium shards for ammo.

The Bio Rifle is a weapon that features in most Unreal games. For ammo it uses the waste byproduct from the tarydium refining process, a toxic green slime called GES. The weapon can quickly fire large amounts of smaller blobs, or one big blob of slime which explodes on impact with living creatures, but sticks to most other surfaces for a short while before exploding. The GES in the UC2 version seems somewhat sentient in that it will follow nearby players by jumping at them. This version can also turn the GES into a "Bio Mist Cloud" which lingers for a longer while. The Skaarj and related Slith species seem to be less affected by the GES then other enemies.

In UC2 there are only two kinds of ammo: energy and explosive ammo. All weapons classified as energy weapons use tarydium packs to power them, and are able to modify the energy produced by the tarydium to their own ends, be it a plasma projectile or a high-powered laser beam.

The Necris are less dependant on Tarydium through their use of Nanoblack, a black fluid of nanobots also used in their Necris process. Nanoblack is used to power their vehicles, weapons, and a shield technology dubbed Invulnerability.