Nestled deep within the foothills of the jungle planet Zeus 6 lies Mazon Fortress, a seemingly impregnable stronghold. Deep within the bowels of the base resides an enormous shard of the rare and volatile element Tarydium. The shard is levitating between two enormous electron rods above a pool of superconductive swamp water. 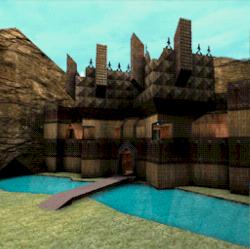 A castle holding a Tarydium crystal in an inner chamber. It has two entrances: one lateral, from a cave, and the frontal one. The attackers start at the top of the hill, and must destroy the crystal inside of the castle.

The castle itself is composed by two curved stairs starting from the frontal entrance. There're also two ramps which end on a single one conducting to the upper level.

Your enemy is using Tarydium, a powerful and volatile element, to power their War Machines. You must infiltrate the base by first destroying the two counterweights outside the west wing of the fort. This will open the doors to the fortress.

Although you can skip this objective, it would be a good idea to have a closer entrance to the base. Once you've entered to the castle and you're in front of the ramp, head to the right and touch the switch to open the frontal entrance.

Find and activate the primary access control switch to gain entry to the Tarydium reactor room.

Finally, destroy the Tarydium power crystal to shut down the operation.

Enter to the Crystal chamber and shoot the crystal with whatever you have. Be careful and try not to fall to the conductive liquid.