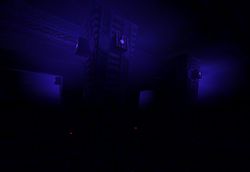 Night Op is the only Darkmatch map packed with the game. Darkmatch is just like Deathmatch, but then in the dark. And apart from a few exceptions, this map has no lights and is completely dark. The exceptions are a room with a large pipe (northwest on the map), which has a bright, white fog, while the main room has foggy blue lights at the 1st floor. Luckily, the players spawn with Searchlights, and there are 6 Flares spread across the map which temporarily light the area they're used in.

The lay-out itself isn't particularly complicated, but complex enough to make a new player get lost. There are 3 floors: The lower 2 floors are connected by 2 slopes in the southwest and a lift in the northeast connects the 2nd and 3rd floor. The more valuable pickups are either in/around the central room (Eightball Gun, Flak Cannon, Assault Vest), or on the 3rd floor (Eightball Gun, Rifle, Shield Belt). Health pickups are limited to a Superhealth in the bright room with the pipe, and a lone Health near the GES Biorifle in the southwest. 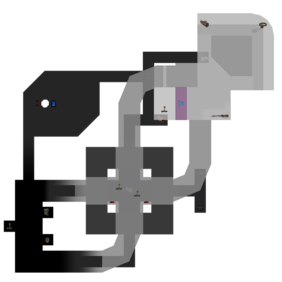 The biggest problem in this map (or the gametype in general) is navigation. Bots are unaffected by the darkness, where a player could get lost easily. Luckily, all the pickups are unlit, and can be seen in the dark. Study the map above carefully and learn the pickup's locations, as well as the lay-out of the map. The rooms that are lit can function as landmarks (points in the map that help the navigation), but be careful when trying to fight opponents in the bright white fog, as it blocks most of the player's view and leaves bots unaffected, giving them the advantage.