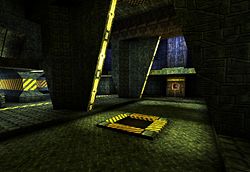 Screenshot of Fire In The Hole

FITH is a medium-sized DM map in a technical facility of sorts. The name FITH (short for "Fire In The Hole") comes from this map's unique feature. In one of the walls in the main hall (the back wall in the screenshot above) there's a small opened hatch, exposing a core. When shot, the hatch temporarily closes while the ground starts to shake heavily (making aiming impossible for a few seconds) and a message appears saying "Only four more to go..." After a while, the hatch will open again so the core is exposed. Shoot it 4 more times to destabilize the core. What this will do is open a hatch in the floor in the middle of the main hall, leading to the facility's sewers with powerful pickups. A few seconds after this hatch opens the core will blow up, causing everyone in the upper part of the facility (ie: not in the sewers) to die. 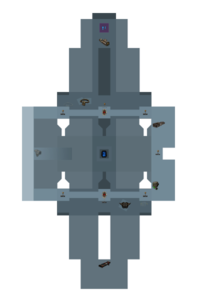 Fire In The Hole

There are a few features in this map that make botmatches a lot easier. First and foremost is the destabilization of the core. Bots won't try and shoot the core, making it easy for the player to destabilize it and get a few easy frags. Another helpful feature comes in the form of the announcer. Whenever a player or bot walks over a numbered pad (with the exception of Pad#1, which seems to malfunction), the announcer will call out the number. Learning the positions of each numbered pad will give the player insight in the opponent's whereabouts. If all else fails, stay on the upper level. That's where almost half of the weapons and ammunition, and all of the health pickups are, plus there's always some cover nearby.