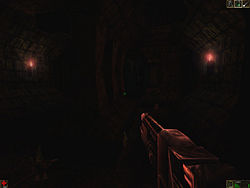 The Eldora Well is the third map in Unreal - Return to Na Pali's single player game.

Description
This level is completely underground, you'll have to go through a lot of water, the monsters are the same as the last two levels, besides the introduction of the Slith. The well goes right under the Glathriel Village and leads out to it.

Your leap of faith has led you into the depths of the Eldora Well. This underground complex is puzzlingly devoid of water considering the number of pools on the planet's surface. Maybe you can restore the water then find a way to move on from here.

You start at the foot of the well shaft, in a small chest-high water pool. Ahead, a step leads out into the dry well tunnels. Climb out of the gunge.

As you step into the storage tunnels, bars close behind you as a Tentacle attacks from the roof to the right. Kill it then look around - a tunnel leads ahead deeper into the complex while containers lie in dead ends to either side and a human corpse lies ahead. Read his log [1].

When you're done, destroy the barrels on the left to get a Clip and a Flare. Go along to the other end of this cross-tunnel to get two Nali Healing Fruit, a Clip and an Automag, plus a wooden crate by a Nali skeleton that reveals a Flashlight. When you're fully kitted out, go off down the large tunnel that goes deeper into the dark complex. You will be approaching another junction; watch out for the Krall asleep at the junction who wakes up and makes an attack as you approach.

At the junction you are at another cross-tunnel, this time with two parallel tunnels ahead that go deeper still into the complex. Make a left and collect a Stinger there then open a nearby barrel for an ASMD Core. Set off down the left of the two tunnels but be prepared for a Gasbag that comes down from the mouth of a small vertical shaft above. Kill the Gasbag and also the Krall that comes running when it hears the fight. When they are both dead, go along to the next cross tunnel (if you are feeling thorough you can go back and round via the parallel tunnel to kill another Gasbag that may come out of another vertical shaft). Either way, go down to the end.

In this cross tunnel, a barrel at the left end contains a box of 10 Flak Shells, while two barrels at the right end reveal a Clip and 40 Tarydium Shards. Collect the ammo then enter the next tunnel from this area.

This last tunnel leads you to a dark lift shaft upwards with a lever at the bottom and barred off water below. Press the lever to call the lift. When it has descended, step on it and ride it to the top. You will be in a pyramidal chamber where you will meet a KrallElite. Kill it then take stock of the room; ahead is a large double door which is currently locked. To either side and behind you are three large control wheel valves. There are barrels in the corners. First, destroy the barrels - you will find a Clip, a Flare and 40 Tarydium Shards.

When you have collected the gear, visit the three control wheel alcoves. Each valve will start a stream of water flowing and once all three valves are activated, chains either side of the door will very slowly begin to move. There follows a brief period of wait while the chains rise, during which you will have to deal with two Flies that come out of ceiling holes. After a short while, the doors open, allowing you access to the long corridor beyond. Go out into the corridor towards more doors at the far end, which open as you approach to reveal an outdoor area which is lit by dim blue dusk light.

Step outside and kill the Brute on guard there. You will also find a Manta swooping round - kill that too. When both are dead, take a look around. It's a closed outdoor area with another well shaft in the middle (which is now full). In the middle of the area are a Nali Healing Fruit and a Flak Cannon. Collect, then go clockwise round the large rock at the left-hand end of the area, past another Nali Healing Fruit, arriving at a corpse which carries a log [2].

Shoot open a wooden crate here for a Shield Belt then re-emerge behind the well. In this vicinity, UMS drop boxes can be shot open to reveal a Combat Assault Rifle and a Grenade Launcher. You can also go back round the front and shoot open the wooden crates for a box of 50 Bullets.

When you're ready, go to the well entrance and jump in. Swim down to the bottom, arriving in the now submerged well tunnels. Watch out as you descend for a Devilfish lurking in ambush beneath a pair of crossbars.

Follow the tunnel to its conclusion - there's a Nali Healing Fruit on the way if you need it - and you will arrive at the bottom of a vertical shaft. Swim up through some damaged bars above, and you will realise that you are in the lift shaft you went up before, which is now full of water and blocked at the top by the lift. A Slith is circling round above, so use your Combat Assault Rifle to destroy it. Take a moment to swim up and surface beneath the lift to recharge your Marine SCUBA Gear.

When you're fully charged, descend again and go towards where you started the level. At the first cross tunnel, you will notice that bars have been removed from a wall entrance to the left. You need to go through said bars, but you may first want to visit the rest of this area to destroy a lurking Slith and Devilfish and to collect anything you may have left behind.

Go through the bars. The tunnel beyond follows round to the right, before reaching another vertical shaft above with broken bars across it. Go through the gap but make sure you first kill the Slith lurking just beyond.

Swim up the vertical shaft. It is blocked off further up by a barrier but look out as you swim upwards for an entrance to one side. Kill the Slith lurking within the tunnel beyond then go along said tunnel's length. Barrels along the way reveal a Clip. At the far end, swim up to the top of a long vertical tunnel and climb out. Your respite does not last for long. Following a short stretch of dry tunnel, you soon have to plunge into water again, shooting a submerged wooden crate for an ASMD Core. A short distance later, you are above the blockage in the main vertical shaft you were in before. Swim up and climb out of the well entrance at the top.

You come out on a small dirt canyon plateau beside a lake. Watch out for a Gasbag that descends from above, then look around. On this plateau, you can go behind a large rock for two Nali Healing Fruit, an ASMD Core and an ASMD. Having done that, you can descend wooden steps to a jetty on the lakeside where a barrel reveals a Clip. A boat is tied to the jetty. Plunge into the water for a UMS drop box containing 10 Grenades. Then, climb out on to the jetty and step aboard the boat. It floats on the current into a cave leading into the cliffs. Shortly, you exit the level.

The scene cuts to an intermission with a view of the plateau. The player records a log entry.

I'm glad I figured out how to bring water back into the underground well system. The Nali won't die of thirst. It's a good thing the SCUBA Gear worked so well; I wouldn't have made it without the new equipment. As much as I hate being back here, I had to say it was good to see the Nali again. I believe I'm getting closer to the Prometheus... I can feel it!

When the log entry is complete, press Fire to start the next level.