The Raptor (named after Velociraptor for its speed) is a vehicle, similar to the Scorpion in both UT2004 and UT3. It is a quick, but lightly armored buggy with 400 health and two seats. The first seat is for a driver, it has no weapons; the second seat is a very inaccurate, explosive round shooting assault turret.

It is the quickest way of getting around in XMP and very suitable for transporting Artifacts. Because its center of gravity lies near the rear, it can make very tight turns; however, it is somewhat sensitive to oversteering. Using the boost option makes the vehicle shoot flames out of its exhaust pipes. If the driver uses the boost and honks the horn while in the air, the vehicle will instead play the first 12 notes of "Dixie".

Built into the front of the vehicle is a set of flesh grinders. If the Raptors drives into an enemy player with sufficient speed, said player will be sucked through the grinders, turned into gibs, and blasted out of the exhaust pipes, a process known as a "gutblow". Team members cannot be gutblown.

Although it was never officially confirmed, but Scorpions from Unreal Tournament series borrow a lot of Raptor's features. UT2004 Scorpion's layout is practically the same as in XMP, the main difference is its size and blades instead of flesh grinders. Both Raptor and UT2004 Scorpion are light, quick vehicles used for transportation. Both vehicles have secret Dixie horns. UT3 Scorpion is even more similar to the Raptor with its functionality and layout. UT3 Scorpion's blades are mounted in the front of the vehicles, where flesh grinders on Raptors are; the Scorpion also utilises a boost function, with flames going from exhaust pipes. Its seft destruct function was created to destroy vehicles such as tanks, similar to what the Raptor can do when it boosts into another vehicle. 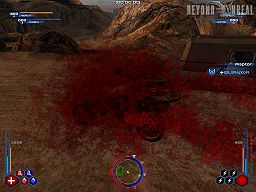 A Raptor using its Gutblow function

The Raptor is the most useful when both seats are occupied, so when you enter one, either drive to your base and ask someone to get into the vehicle, or enter the second seat and wait for somebody to come yourself. The turret is very powerful, especially at close range, and can take out en enemy in seconds; however, it's not as useful in long ranges, as it has a wide spread.

When driving, use the Boost ability wisely. It charges fastly, so use it often. It is also a very useful function for gutblowing unsuspecting enemies. Boost is also used for the secret Dixie horn: boost and just after you press the boost key, press the horn key to hear the Dixie horn.

The main use of the Raptor is to use it for transport to the enemy base, and especially out of it. If there is no Raptor spawn point in the enemy base, make sure you exit your own vehicle in an easily reachable place, but be careful not to give it to your opponents. If the enemy base has a Raptor already, boost into a Harbinger or another vehicle and eject just before crashing to destroy both vehicles, and after taking the Artifact, use the base's Raptor to make sure enemies can't chase you.

Raptor can also be used for a transport technique known as Raptor Concussion Jumps. You need two people for it: a driver and a Gunner with Concussion Grenades. The Gunner must time it right to drop a Concussion Grenade just under the vehicle just at the moment it boosts. That results in a very long and high jump, allowing the driver to reach otherwise unreachable places, such as the top of the mountains in XMP-Sirocco.

Going against the Raptor

The Raptor is rather light, and it doesn't need much damage to take out. The best weapon to use against them is the Grenade Launcher with Concussion Grenades. They will send the vehicle flying, and inflict a lot of damage when it lands. Usual anti-vehicle equipment works good too - EMP grenades or Shock Lance's EMP fire will usually destroy the vehicle in one shot.

In U2XMP, Raptor is a perfect vehicle to plant Laser Trip Mines for quick kills. Crouch under a Raptor in the enemy base, walk as far as you can under it and plant a Laser Trip Mine on the Raptor. The mine will be nearly invisible, and its explosion is guaranteed to destroy the vehicle and the driver.