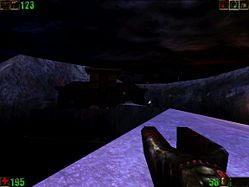 Author
Nivlek
Description
You are up in the mountains. Having dropped through a hole in the ground, you have landed in an underground cave. Your travels are continuing to lead you through increasingly hostile terrain... but you must be nearly there by now!

This walkthrough was completed on Medium difficulty. Creature and item placements differs heavily on other difficulty settings.

You start in the cave beneath the hole you entered at the end of the previous level. It stretches down a slope ahead; step forwards and descend the tunnel.

At the bottom of the slope, the cave rounds a corner to the right. Follow it and destroy crates in the tunnel for two ASMD Cores, then collect them and continue round the corner beyond. Doing so, you will find that the caves become icy and foggy again. You must be approaching the open air.

Enter the icy cave ahead, collecting the two Nali Healing Fruit on the right as you go if necessary. In the cave, the corpse of a UMS Prometheus crew member is slumped against a pit prop to the right. Read his log [1].

Continue through the cave, collecting two cans of 12 Eightballs from the left of the mouth of a tunnel ahead. Follow the tunnel, readying your ASMD or another good weapon. Descending the tunnel, you will reach another icy cave which is guarded by a Mercenary. Surprise it and kill it. Enter the small cave. A tunnel leaves this cave to the right. Collect the Health Pack from on top of a box to the left, then head up the tunnel. It is guarded by two Mercenaries; kill them. A wooden crate on the right reveals a box of 50 Bullets.

Out here, a long icy zig-zagged causeway ascends a slope towards a building on a plateau at the top. To either side, an abyss drops down an impossibly long way. Select the Combat Assault Rifle or another hitscan weapon, and start heading up the torchlit precipice. It is extremely slippery and thus deadly - very easy to fall off. Climbing up past the first corner, you will see a MercenaryElite on guard near a torch ahead. Kill it, then collect the Nali Healing Fruit and can of 12 Eightballs from beside said torch.

Carry on up the causeway. Don't waste any time now. Approaching the main plateau with the building, you can collect a Nali Healing Fruit on the fly. Once safely at the plateau, kill the Mercenary there that is guarding a bunch of UMS drop boxes.

You are at the foot of the building. Open the drop boxes here for a Grenade Launcher and two 50 bullet CAR Clips, then look around. The plateau continues in a ring around the building; start heading round it in an anticlockwise direction. You will soon reach an entrance on the corner of the building to the left with a ramp up to a foyer inside that is guarded by two Mercenaries. Kill the Mercenaries.

Round the back, you will see a rock ahead. UMS drop boxes are beyond to the left of the boulder. Go to the right of the rock first and you can collect two cans of 12 Eightballs from beneath a torch. You will also see that a ledge descends round the plateau cliff from here. Leave it for now - you'll be going down there later.

Go back round the rock and open the two UMS drop boxes there. In doing so you will alert a gaggle of two Mercenaries and a MercenaryElite on guard - I found the Rocket Launcher quite effective here. When you have disposed of the three, collect the Rocket Launcher and 50 bullet CAR Clip the boxes have revealed. Then, head on round the side of the building. Turning the corner, you should be heading back along the building's longer side towards the front. Watch out for a MercenaryElite on guard.

A corridor leads out of this room to the left. Take it. Passing an entrance to the right, you will be met by a Mercenary. Kill it then go into its chamber. This chamber is similar to the previous one but has wooden crates that reveal a Health Pack and a can of 12 Eightballs. There's also a door off to the left behind which you can hear Mercenary voices. Leave it for now.

Go back out of this room into the inner corridor you just left, then follow it on round. A corner later and you are led to another junction. Kill another Mercenary that attacks from the entrance to the right, then go straight on out of the corridor into the chamber at the end. Here, containers reveal a Flare, a box of 10 Flak Shells and a Health Pack.

A door to the left just leads back outside, so return to this end of the inner corridor and take the junction to the left into the chamber where the Mercenary attacked you from just now. Here, containers reveal a box of 50 Bullets and a Health Pack. There's also a door to the right - you can hear behind it the Mercenary voices you avoided earlier. Select a powerful gun like the Flak Cannon and go through the door - you will find yourself in a large hall guarded by a gaggle of two Mercenaries and a MercenaryElite. Kill the guards then look around.

This hall has in its centre a huge teleporter device. Open barrels to the right of where you came in for a 25kg can of Tarydium Sludge and a Clip near a door (which is the inner door you ignored earlier). Go to the centre of the hall and step on the teleporter; you'll get a message [2].

This won't work yet then. Before leaving the hall, go round the edges of the hall clockwise getting goodies from wooden crates. The first lot reveals a box of 10 Flak Shells. A single crate further round reveals an ASMD Core. On the third side of the room, you will find a crate that reveals a Health Pack. You'll return to the front end of the room at the far side from where you entered. There are two further doors here. Near the leftermost door is a barrel that reveals a Clip. Collect the Clip, then go through said door.

Entering another small chamber much like the ones you raided before, you'll run into a Mercenary. Kill the Mercenary then open containers for a Clip and 40 Tarydium Shards. Head to the right, and you'll be in another access corridor that leads to either side.

Go left first into another chamber for a barrel that contains a Health Pack. A door here leads outside but there's more gear to collect yet, so go back into the corridor and go along the access corridor in the other direction. It'll head round to the left and you'll be attacked by a Mercenary from ahead. Kill the Mercenary then continue along the corridor and go through a door to the right. Kill another Mercenary that intercepts you here, then open containers for an ASMD Core and a Nali Fruit Seed.

A door here only leads back into the large hall, so return to the corridor and go to the right into the final chamber. Chests behind a cross at the far end reveal two boxes of 10 Flak Shells. From there, go through the door to the left to return outside to the first entrance foyer you saw earlier.

The teleporter message referred to an underground control unit. Do you remember that ramp that lead down round the plateau cliff? That's where you want to go now. So, go straight on from the door and out of the foyer. Turn left and, once again, follow the plateau round anticlockwise. At the back, approach the top of the sloping walkway near a torch to the right of a rock.

Make your way down the causeway. It is very slippery so hug the cliff - use your strafing keys to do so - at times it looks as if it is coming to an abrupt end, but stick to it. Eventually, you'll be on a torchlit section beneath the main access causeway above.

At this point, a tunnel leads downwards and into the plateau cliff. Step down the tunnel and you will be in a small cave where a MercenaryElite operates a panel. Kill the Mercenary and operate the panel yourself. It displays a message [3].

The big teleporter will be active now. Go back up the tunnel and left onto the walkway outside. Follow it on round the cliff. Climbing up again, soon you will be back on the plateau round the right hand side of the building - go back along to the front.

Your destination is the large central hall of the building, so find one of the entrances and follow the chambers into the hall. You will see that the teleporter is online. As you approach the teleporter, two huge Spinners may drop down. You can shoot them, but they are hard to kill, so avoid them and step on to the teleporter to exit the level.

The scene cuts to an intermission with a view of the underground control unit. The player records a log entry.

The ice caves and that nasty snow-covered ridge were leading me in the wrong direction, away from the shuttle... but I had no choice. When I fought my way into the fort and saw the teleporter, I didn't know what to think. Where would it take me? Closer to my goal, or to some other part of the planet? My experience with these teleporters suggested that it wouldn't take me too far... and I had no choice but to step on and find out.

When the log enry is complete, press Fire to start the next level.