(Redirected from Return To Na Pali)
Jump to: navigation, search

Return to Na Pali, or RTNP, is an expansion pack to Unreal and the original release of the pack required the full version of Unreal to install and play. The game takes place about 5 years after the events in Unreal and puts you back on the planet Na Pali to find another crashed spacecraft. RTNP was developed by Legend Entertainment using many of the left over art and assets from the development of Unreal, and nearly all of the levels that were cut from Unreal. RTNP was released to stores on May 31, 1999. 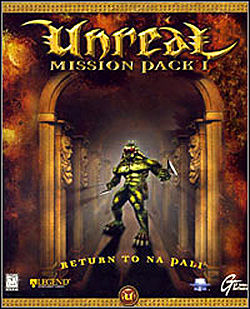 No demo was ever released for this expansion pack.

Eventually, RTNP was packaged up with Unreal and released as Unreal Gold. Unreal Gold became part of the Totally Unreal package as well as the Unreal Anthology.

Overall reception to RTNP was not great. Most people complained about the bugs it had, the broken co-op play, and bad voice acting.

In addition to reusing many tracks from Unreal, RTNP added a number of tracks. The majority of these tracks had been released prior to Unreal.

Note
Opal was included with Unreal, but unused.

The music is available for download in .mp3 format here. There is also additional related music available here.

In addition to the Unreal weapons, the following weapons were included in Return to Na Pali.

In addition to the gametypes included in Unreal, Return to Na Pali also included the following gametypes.