Unreal Tournament is the first game in the Unreal Tournament series and the second game in the Unreal series. Development began sometime in 1998 after the poor reception to Unreal's multiplayer component as a multiplayer expansion pack for Unreal. Later, it was decided that the game had enough changes to make it into a standalone game. The game was released to stores November 23, 1999. 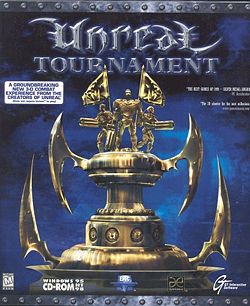 In 2291, in an attempt to control violence among deep-space miners, the New Earth Government legalized no-holds-barred fighting. Liandri Mining Corporation working with the NEG established a series of leagues and bloody public exhibitions. The fight's popularity grew with their brutality. Soon, Liandri discovered that the public matches were their most profitable enterprise.

The professional league was formed. A cabal of the most violent and skilled warriors in known space, selected to fight in a Grand Tournament.

Now it is 2341, fifty years have passed since the founding of Deathmatch. Profits from the tournament number in the hundreds of billions. You have been selected to fight in the Professional League by the Liandri Rules Board. Your strength and brutality are legendary. The time has come to prove you are the best.

To crush your enemies.

To win the tournament.

Unreal Tournament began life as an expansion pack for Unreal. When it was realized that the multi-player aspect of Unreal was popular and something that people sought after, Epic began working on a multiplayer expansion pack for the game to fix the problems with online play. At some point during its development, it became clear that the number and extent of the changes to the Unreal codebase that Epic was required to make made Unreal Tournament too incompatible with Unreal. Thus the expansion pack was broken off from Unreal and made into a standalone game. Unreal Tournament contains all of the content that Unreal had except for the maps and music.

The first publicly available version (Version 322) of the demo was released on 17 September 1999. A Version 321 was briefly and accidentally available the night before but was rapidly withdrawn.

The Version 322 demo is for use with 3dfx video cards only. This early version of the demo omits DM-Tempest.

A patch was provided to update Version 321 to 322.[1] Two days later, a patch to the 3dfx-only demo was provided to correct a server crash that occurred whilst using the Web-based remote administration facility.

The first full demo (and a patch to the 3dfx-only demo to convert it to the full demo) was released 28 September 1999. This took the demo to version 338. A Version 338a demo intended to test a server map change problem was accidentally released but rapidly disowned by Epic. The Version 338 demo is not compatible with the final version of the full demo.

A final demo for Unreal Tournament was released on October 19 1999[2] and contains 5 maps from the game; one map for each gametype. The demo has the maps CTF-Coret, DM-Morpheus, DM-Phobos, DM-Tempest, and DOM-Sesmar.

An additional patch to the Version 348 demo to fix a crash whilst playing back recorded demos was released 20 October 1999.

An additional patch to update Version 348 servers was released 9 November 1999. Network compatability is unaffected by this patch.[3]

Unreal Tournament is still, arguably, the most popular Unreal series game ever released. It generated an enormous community and was many people's first multiplayer experience.

Although the graphical capabilities of the Unreal Tournament engine have long since been surpassed, it is still one of the most played games on the Internet (as of July 2007). This is due, in part, to its grounded gameplay and weapon balance.

Although some tracks have more than one section (And are listed appropriately) it's important to note the extra sections are never played within the game itself. However, using a Module Player, such as XMPlay, one can listen to the extra sections.

Here you will find all the links to the downloads of the essential files for your Unreal Tournament installation.

Also called the Inoxx Pack. Released 11-May-2000 by Epic. All of the content in this pack was created by Cedric "Inoxx" Fiorentino.

UTPG is a group of people that continued Epic's work of making Unreal Tournament patches after Epic released it's final, official patch: Patch 436. More information is on the UTPG page[5].

Over time, fans have created many modifications for Unreal Tournament which include mutators, gameplay altrerations, and even single-player campaigns, which in some cases are loosely based on the original storyline of Unreal.

Way back in 1998, we started on a multiplayer bonus pack for Unreal 1, which was initially going to be a free release, then a level pack, and then it turned into Unreal Tournament (...)[6]