Unreal Tournament 3, also known as UT3 (previously codenamed Envy and also formerly named Unreal Tournament 2007, UT2007, or UT2k7) is Epic Games' sequel to Unreal Tournament 2004. Published by Midway Games, UT3 is powered by Epic's new Unreal Engine 3. The game was released in late November 2007 for the PC, December 2007 (NA) and February 2008 (EU) for PS3, and July 2008 for XBox 360. Linux and OSX versions of the game were planned but never released, with no official explanation given for the cancellations. The two versions of the game were apparently far along with Ryan Gordon even posting screenshots of the game running on the two platforms[1]. 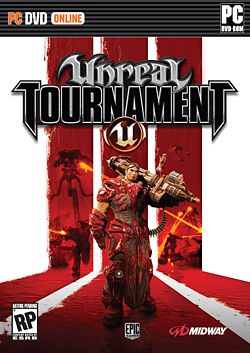 UT3 was revealed to the world in the May 2005 issue of Computer Gaming World magazine. The first news of it began to appear on or around March 27, 2005. The game was originally codenamed UT "Envy", but later, around May 29, 2005, it was revealed that the name had been changed to Unreal Tournament 2007. It was not until January 25, 2007 at the Midway Gamer's Day event in Las Vegas that it was revealed that the game's name had been changed to Unreal Tournament 3. This change was met with great enthusiasm from the Unreal fan base.

Early in the development of the game, many features were discussed that were later dropped. A game mode named Conquest was originally announced as a war spanning multiple levels with lots of dynamic things like nanoblack taking over parts of levels owned by the Necris. An updated version of Onslaught entitled Onslaught 2.0 was also discussed early in the game's development cycle.[2]. LAter both of these game modes were collapsed into Warfare.

Unreal Tournament 3 promised a return to the "feel" of the original Unreal Tournament. Epic's aim was to make the game more in-your-face, fast-paced, and less "floaty". To accomplish this, gravity was increased and dodge jump was removed. However, dodging, double jumps, and wall dodging remained. Gameplay in UT3 stresses close combat and projectile weapons more than any of its predecessors.

The demo, which was Version 3464, came with 3 maps: DM-ShangriLa, DM-HeatRay, and VCTF-Suspense. Of note is that DM-HeatRay was the first taste of the Necris vehicles, specifically, the Darkwalker.

Epic called the release an "Open Beta Demo" in an attempt to signify the incomplete status of the demo. Epic promised to respond to user feedback in order to fix issues in the final game. Several issues reported during the beta demo period were fixed or began to be fixed in the first patch. An updated demo fixing these issues was never released.

On November 12th, 2007 (a full seven days prior to the NA release), the German version of the game was released to German retailers. In order to comply with German regulations for public game sales, the game had blood, gibs, and headshots removed from the game. Very little else was changed except for the localization to German.

Reception to the beta demo was generally positive, with most people agreeing that Epic has "got it right." There was some notable dissension from the crowd who enjoyed UT2003 and UT2004 though, particularly about the removal of dodge jump. Unreal Tournament players, which Epic were targeting, didn't switch to UT3 either due to steep system requirements and the overall unstable state of the game for months after release.

Reception to the game on PC was been mostly favorable from the community and warm from reviewers, with a score of 83 on Metacritic[3]. Warfare, in particular, has been praised for being a more strategic and improved version of Onslaught, though the gametype turned off many veteran Onslaught players due to additions like the Orb.

Several issues with the game led to low player numbers, with the key issues being:

On October 26, 2007, a limited collector's edition of the game was announced to be released on PC. This version of the game featured an exclusive Collector's Edition tin and a hardcover art book. A bonus DVD is also included featuring more than 20 hours of Unreal Engine 3 toolkit video tutorials, the history of the Unreal Tournament series, and behind-the-scenes footage of the making of the game. The bonus DVD contained a DRM called Anti-WarHawK (AWH) which would disable video playback in isolated cases.

Epic promised to release a Linux installer for the game that would work with the standard Windows disc. However, it was later revealed that due to unknown "legal issues" the Linux installer was not going to be released. The game only works with Windows to this day, however it is possible to run the game in Linux using Wine[4].

On October 20th, 2008, Mark Rein announced via email that Midway and Epic were working on a "major expansion" for UT3[5].

On January 26th, 2009, the first part of this expansion was revealed in the form of a major patch. This information was first revealed publicly by BeyondUnreal.

The second part of this expansion was called the "Titan Pack". On February 19th, 2009, the contents of the Titan Pack were revealed[6]. Two new gametypes (Greed and Betrayal), one new Mutator (Titans), 2 new characters (Nova and Kana from the 360 version of the game), and 16 new maps, including the five exclusive 360 maps. The Titan Pack, along with Patch 2.0, was released March 5th, 2009.

Critics of the Titan Pack complained about the number of servers running the Titans mutator, which gave players the ability to turn into giants with overpowered weapons. Many players found this mutator uninteresting and most of the servers running after the pack was released were running the mutator.

On April 3rd, 2014 it was revealed by Glu Mobile (current owners of the Gamespy brand) that the Gamespy multiaplyer service would be shutting down on July 31st, 2014. This stood to kill the master servers for the game. Epic decided to release an update that removes Gamespy[7] and replaces it with an in-house solution. This had the side effect of killing the stats tracking for the game entirely and disabling the in-game friend list, however with the update it is still possible to play the game online and continue to host servers for the game.

On January 29th, 2009, it was revealed that owners of the retail copy of UT3 would be able to use their CD key to register the game on Steam[8]. Registering the game on Steam provides access to Steam-only features such as the achievements added in version 2.0 of the game.

Rom Di Prisco and Jesper Kyd composed the UT3 soundtrack. Kevin Riepl also had a major hand in music production for the game, scoring the cutscenes as well as a few in-game music tracks.

An official game soundtrack was released November 20, 2007. The 2-CD set contains the ingame music, done by Kyd and DiPrisco, which feature a number of remixes from previous Unreal Tournament games. Not every track are present in the soundtrack. All cutscene music is missing, as are the themes to WAR-Downtown and CTF-Coret are missing, due to those tracks being composed by Kevin Riepl. These tracks are, however, available from his site, along with some songs from E3 videos and other early demonstrations.

All Powerups are dropped when the player is killed, or if they are knocked off of the player with the Altfire of the Impact Hammer.

The Necris have six vehicles at their disposal:

Teams present in UT3 are the following:

These teams have probably been in the game at one point, but appear to have been cut:

New to the Unreal Tournament games, UT3 now includes the option to fully customize your character. Players are able to switch out several armor pieces:

Included are the following characters:

Note: You can unlock 'Leaders' by beating them in the Singleplayer Campaign. All of the Necris characters are unlockables. Ariel and Alanna are special characters unlocked by 2 codes. Cyclops lacks a description, and may become unselectable once Nova (from the 2.0 patch) is installed. Kensai doesn't have a personal portrait.

This time around, Epic chose to step away from the wildly different maps seen in previous tournaments, and instead create a few cohesive worlds and tie them together with their level design. 41 maps shipped with the game and 15 of them are Warfare maps. As of the Titan Pack, the total map count raised to a staggering 60 maps.

The following mutators either come with the game or have been added in later bonus packs.

Before any official bonus content was released, Epic "cooked" a few user created maps and mutators for use with the PS3 version to give those users something to play with. (All custom content must be created on a PC.)

On the 20th of November 2007, AGEIA released a pack of two UT3 maps (CTF-Lighthouse_PhysX and CTF-Tornado_PhysX) to show off advanced PhysX technology. The pack was later re-released by NVIDIA and included one more map (DM-HeatRay_PhysX).

On the 27th of March 2008, Epic released their first bonus pack, which contains three maps: DM-Morbias, CTF-FacingWorlds and CTF-Searchlight.

The Xbox 360 version of the game has 2 new characters (Kana of the Twin Souls and Nova of the Liandri) as well as the Bonus Pack maps and 5 exclusive maps, which are: WAR-ColdHarbor, DM-KBarge, VCTF-Rails, WAR-Downtown_Necris and VCTF-Suspense_Necris.

The Titan Pack is the second bonus pack. The pack includes two new game modes, one new mutator, Kana and Nova from the XBox 360, two new deployables, a new powerup, a new vehicle, two new weapons, and 16 new maps, five of which are the former XBox 360 exclusive maps. It also includes the three maps from the first bonus pack. It was released March 5th, 2009.

Here you will find all the links to the downloads of the essential files for your Unreal Tournament 3 installation.

Awarded for making a certain number of kills without dying. Sprees are reset upon death.

Awarded for making the amount of kills within 3-4 seconds of the previous kill.

Awarded for getting the amount of kills with the said weapon.

Epic planned to use UT3 to bring more and more people into the Unreal community, with strong community integration out of the box. In-game lobbies were planned for Warfare, and game stats integration would have allowed you to find similarly-skilled opponents via the UT3 server browser. However, none of these elements shipped with the final game.

A global rankings system does exist to allow clans and other players to compare scores.

PS3 users can download specially cooked versions of various maps and mutators, provided the author supplies them. However, there are some limitations, and custom sounds or music cannot be supported in PS3 versions of the maps due to a proprietary sound codec being used.

The XBox 360 version does not support custom content. However, the Xbox 360 version of the game shipped with exclusive maps and characters not found on the PC or PS3 versions, as well as a split-screen mode. These features were added to the PC and PS3 platform with patch 2.0 and the Titan Pack, though split screen support on PC is limited.

UT3 will bring major advances in the artificial intelligence that controls UT bots, as well as the way in which players communicate with them. UT3 players will be able to give bots specific orders using their own voices. Whereas in UT or UT2004 you'd use the voice menu to tell your bots to "attack", you can now give orders like "There's a sniper on the tower, go get him". Bots will also respond to particular questions. For example, if you asked "Is there anyone in the cave?", they might reply "No, the cave is clear".

Apparently, this feature is quite buggy however. It is reported to work best for users who have a clear North American accent.